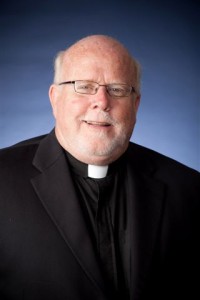 Father Guy Noonan is a Phi Beta Kappa graduate of The Catholic University of America at Washington, DC, having received his B.A. in Religious Studies in 1972. As a member of the Franciscan Friars, T.O.R., he was assigned to a two-year teaching post at the John F. Kennedy High School in Warren, Ohio. During that time he taught religion on the freshman and sophomore levels.

He then returned to The Catholic University of America to pursue further studies, including the completion of ecclesial requirements for ordination to the priesthood. He received a Masters Degree in Religious Studies and Theology, and was ordained in August of 1976. He was then reassigned to Kennedy High School as a member of the religion department, and taught religion on the junior and senior levels until 1979.

In 1979 Father Noonan was assigned to the newly formed staff of Franciscans at San Pedro Center, Winter Park, Florida, in the Diocese of Orlando. He filled-in as temporary Director of the Center for the first 9 months, and then as Associate for three years. He was subsequently appointed Director. During this time he served as a member of the spirituality team, offering retreats and formation programs both at the Center and throughout the Diocese.

In 1984 Father Noonan was appointed Justice and Peace Director for his Franciscan community; he was subsequently assigned to the Diocese of St. Paul and Minneapolis as Associate Pastor at St. Bridget Parish. He was Administrator and then Pastor in 1988. During his tenure he was a founding member of The Joint Ministry Project, an ecumenical association of churches in Minneapolis. This Association was endorsed by The Campaign for Human Development of the Catholic Bishops’ Conference, and focused on leadership development around three issues: housing, education and crime.

In recognition of leadership experience, in 1996 Father Noonan received a mid-career leadership development grant from the Bush Foundation of St. Paul, Minnesota. This enabled him to pursue studies in Europe, where, in 1998, he received a European equivalent of an International MBA from the Franco-American Center at the University of Caen in Normandy, France. His focus was on management processes, and also community development.

During the same period of time as his doctoral studies, Father Noonan was accepted as a candidate for incardination into the Diocese of St. Augustine, Florida. His incardination has been completed. He served as Pastoral Vicar at Christ the King Parish in Jacksonville for one year. He was then assigned to Gainesville, Florida where he served for three years as Pastoral Vicar at Saint Augustine’s Parish and Student Center. In June of 2006 he was assigned as Pastor to the joint parish community of Saint Ambrose/Elkton and Our Lady of Good Counsel/Mill Creek. Two years later, in June of 2008, the joint communities were separated and Our Lady of Good Counsel was canonically erected as an individual parish.

Father Guy is now full-time pastor of Our Lady of Good Counsel and may be contacted via the office.