The church that enshrines the original painting of Our Lady of Good Counsel is located in the small town of Genazzano, about 30 miles southeast of Rome. As early as the fifth century, the people of Genazzano were greatly devoted to the Blessed Virgin Mary. When Pope Sixtus III ( 432- 440 ) asked for donations to restore the Basilica of St. Mary Major in Rome, the faithful were generous in their support. Shortly thereafter, they built the church dedicated to Our Lady of Good Counsel in Genazzano. The church was entrusted to the care of the Augustinian Fathers in 1356. 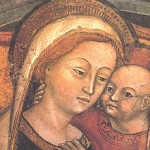 Our Lady of Good Counsel original fresco from Genazzano 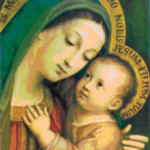 Our Lady of Good Counsel by Pasquale Sarullo, 19th century

With the passage of time, it was necessary to repair the church and it appeared that only a local widow, Petruccia de Geneo, was willing to aid with the financing of the restoration. She was criticized by some of her neighbors but her efforts were rewarded by the miraculous event of April 25, 1467.

According to legend, the entire town was participating in the yearly feast in honor of St. Mark the Evangelist. The church was still unfinished and roofless when the image of the Madonna and Child was transported there from its former location in Scutari, Albania. Around four o’clock that afternoon, the multitude of people saw a mysterious cloud descend upon the church. The church bells rang of their own accord and the cloud parted revealing the portrait. The image, 15 inches wide by 17 inches high, came to rest on a narrow ledge in the church and remains in that position to this day. The painting is a fresco, painted on a thin layer of plaster as thin and fragile as an egg shell.

Within weeks, two refugees from Albania arrived in Genazzano. They testified before the papal delegation that the same image was in a church in the Albanian town of Scutari only a few weeks earlier. When the town was on the verge of being invaded, the portrait was miraculously relocated for its own protection. The commission verified that there was indeed an empty space in the plaster wall of the church at Scutari, the exact size of the portrait.

The unfinished church was soon completed after the miraculous event of April 1467, and became a place of pilgrimage. Within the first six months alone, over 170 healings and miracles were recorded.

The miraculous image, at first called the Madonna of Paradise, has always been regarded with special favor by the Apostolic See. Pope Paul II (1464-1471 ) called for an investigation and gave initial approval to devotion to Our Lady of Good Counsel. Pope St. Pius V ( 1565-1572 ) attributed the victory in the Battle of Lepanto to the help of Our Lady of Good Counsel.

In 1753, Pope Benedict XIV approved the placing of a gold crown over the image and in 1779 Pope Pius VI granted the Augustinian Order the special privilege of celebrating the Feast day each year on April 26. Pope Pius IX (1846-1878) had special devotion to Our Lady under this title and made a pilgrimage to Genazzano in 1864.

More than any other pope, Pope Leo XIII ( 1878- 1903 ) had a deep love for this devotion. He was born in the town of Carpineto, not far from the Church of Our Lady of Good Counsel, and elevated the shrine to the status of a Minor Basilica. In 1903, he inserted the title “Mater Boni Consilii” into the Litany of Loreto and also had a copy of the image installed in the Pauline Chapel of the Vatican Basilica.

Pope Pius XII ( 1939-1958 ) dedicated his entire pontificate to the Madonna of Good Counsel and Pope John XXIII ( 1958-1963 ) made a visit to the shrine in 1959. The present church was built in 1628. In World War II, a bomb crashed through the roof, destroying the sanctuary and high altar. The fragile image of Our Lady of Good Counsel was only a few yards away but was miraculously undamaged.*

*The above article about OLGC appeared in the Fairfield County Catholic