Jacksonville, Fla. – The Vatican announced today that Pope Francis has appointed Father Erik Pohlmeier the next bishop of the Diocese of St. Augustine. For the past 24 years, 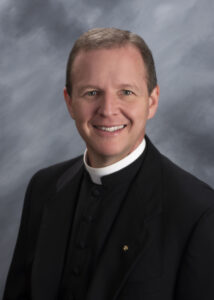 Bishop-elect Pohlmeier has served as a pastor in the Diocese of Little Rock, which encompasses the entire state of Arkansas.

Raised in Paris, Ark., Father Pohlmeier was ordained a priest for the Diocese of Little Rock on July 25, 1998. He currently serves as pastor of the largest parish in Little Rock, Christ the King, and director of the Faith Formation and Deacon Formation offices. He has been the theological consultant for the Arkansas Catholic newspaper for 19 years and director of continuing education of clergy since 2019.

In his new appointment, Father Pohlmeier succeeds Bishop Felipe J. Estévez, who has served the St. Augustine Diocese for the past 11 years and is retiring at the age of 76. He will be installed as the 11th bishop of St. Augustine on Friday, July 22 with Archbishop Thomas Wenski of Miami presiding at the ordination liturgy. Bishop Anthony B. Taylor of Little Rock and Bishop Estévez will be co-consecrators. Details of the ordination have not been announced.